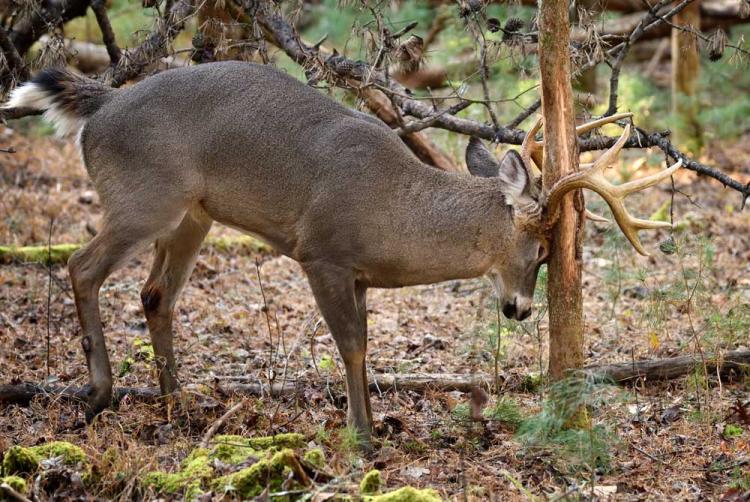 Fresh whitetail rubs are a great thing to see in your hunting area, especially when new ones show up just before you hunt an area. Just like scrapes, whitetail rubs are visual and scent-marked signposts that convey information to other deer. Following are some facts about them.

A few years ago, I read a piece that said there were several reasons why bucks rub. Among several others, one was to remove antler velvet; another was to build up neck muscles.  While rubbing does help to accomplish these things, I don’t believe either is what motivates them. The fact that they’re rubbing may aid in detaching some velvet, and it’s obvious this act helps to build up those majestic-looking, “linebacker-like” necks we see, but I don’t believe they rub solely to accomplish velvet removal or for a good workout. Neither is its own classification of rub; it’s simply the buck testing out their new antlers and marking the area with a signpost – both visually and with scent.

Velvet falls off, is eaten off by birds and other deer, scuffed off from sparing and numerous other incidental reasons and is usually accomplished after only a few hours, but pieces can stay connected for some time. In my view, the main reason bucks make rubs is to create a signpost for the other deer in the area, both bucks and does. A visual and scent-coated marker that transmits numerous details to the other deer in the area.

2. DO BUCKS TRANSMIT SCENT WITH RUBS?

One of the main ways they transmit messages to other deer through rubs is through their forehead glands. Those of you who have seen or harvested older bucks may have noticed the hair on their forehead will get wavy or discolored (sometimes a reddish or dark-brown color) coming into the rut. It’s because this gland is so much more active during the fall. Aroma from the tree is released when they break through the cambium layer. This also serves as a visual sign. Then they rub their forehead on the rub to deposit their individual “bouquet.” Both bucks and does have these glands, but mature, socially high-ranking bucks tend to excrete more from them.

The majority of rubs are made by more dominant, breeding-age bucks in the area to signal their readiness to breed, to announce their influence over a given area and to transmit other socially important information. Young bucks also make rubs, but mature bucks rub more often, are the first to make rubs in the fall and will create the rubs that are most often the ones focused on by the other members of the herd.

When there is a balanced herd, the older bucks tend to be the main signpost makers and message “senders” within the group, and younger males and females are the primary message “receivers.” It has been shown that the chemical signals exchanged at a rub will suppress the aggressiveness and sex drive of younger males and those same signals stimulate females and help synchronize breeding cycles. As a result, the presence of older bucks and these signposts (both rubs & scrapes) helps maintain social order in a given area.

4. DO BUCKS ONLY RUB ON TREES?

Don’t always expect rubs to be on trees and saplings, they may also choose to rub on fence posts, bird-feeder stakes, telephone poles, shrubs, bushes, corn or sunflower stalks, and other objects. Different deer have distinctive personalities. Some deer seem to love to rub and others don’t do it as often. The number of rubs usually correlates with the age and breeding status of a buck. Sometimes the amount of rubs also depends on the type or size of the trees in an area. If there aren’t many trees of the right size or type, obviously you won’t see as many rubs.

5. CAN YOU DISCERN TRAVEL ROUTES WITH RUBS?

6. IS THE SIZE OF A RUB A GOOD INDICATOR OF BUCK SIZE?

They are a good indicator of the size of the buck that made it. You’ve all heard, big deer rub on big trees - small deer rub on small trees. For the most part, that’s true. However, big deer will also rub on small trees, but small deer seldom rub on big trees – they may interact with the larger rub, but they are not the creator. If the rub is on a small tree, how high it is off the ground is a good indicator as to the size of the buck - the higher off the ground, typically the bigger the buck. Unless the tree was so skinny, a smaller buck could have pushed it over and worked up the tree that way.

Rubs are one of the best physical scouting aids we have. Now-days trail camera photos are what most people rely on, but aside from an actual animal sighting, you can gather more information from a rub than any other form of physical sign. If you search out rubs in your hunting area, they just might lead you to a buck this season.

89.6 acres of Farm and Cut Over Woodland under Natural Regeneration with Small Pond!
View listing